Will One New Transmission Line In NH Fix The Problem Of High Costs? Answer: NO  Think of it this way, if Disneyworld was located In Tilton, NH and you wanted a day of entertainment at Disneyworld and lived somewhere in New Hampshire, it would be a relatively short trip …. and by far your greatest cost for the day would be your entrance fee at the gate.  Put it a distance away, like Florida or even New Jersey, and the whole cost structure changes with transportation and other costs.  New Hampshire could choose to rely completely on power supplies located outside our borders, but don’t forget there is a significant fixed cost of  transportation in the form of monopolized transmission lines that come with the deal.

The currently proposed transmission line from Quebec, known by most everyone by now as Northern Pass (“NP”), is proposed to carry 1090 MW of hydropower through New Hampshire to Massachusetts load centers, of which only 100 MW would come back to our state in the form of an undisclosed (to the public) power purchase agreement (“PPA”) between NP and Eversource.  The current peak demand load on our NH grid is approximately 3000 MW, so 100 MW would be about 3.5% of our peak load requirements. As shown in the chart below, as of January 2016 ISO-NE report, there were eleven (11) proposed transmission projects competing to connect to the ISO-NE grid totaling more than 7,000 MW of potential capacity.  Simply put, the addition of 100 MW of new hydropower supply from Canada to New Hampshire is not going to fix the high cost of energy in New Hampshire no matter what price that energy is offered at, as your fixed (T&D) charges will remain the same or increase, and the size of the new supply is so small compared to the total load.  As outline in Vol 1, if we can’t change our location, which I’m pretty sure we can’t, we are never going to remove ourselves from one of the highest energy cost regions in the country.

Multiple transmission lines from the north (Canada) do have the potential of bringing in supplies to replace our aging fleet of existing power plants in New England, but the costs of transmission won’t be small, and the sellers of electricity usually figure out how to price themselves to the marketplace (aka-supply and demand, what the market will bear, etc.), which means that our existing high costs are likely to remain high costs on a regional basis as compared to other parts of the country.  As a system, our demand side is not growing due to new energy efficiency measures and distributed generation deployed within ISO-NE as shown below in ISO-NE’s January, 2016 report.  However, it will take new kinds of state initiatives to unlock New Hampshire’s ability to reduce our total system demands.  Another words, how the system will operate in the future won’t look like the past (see Vol 6 when posted), so solutions to the supply side of the equation have to change as well as solutions to the demand side.

There is some recent good news on the capacity front.  ISO-NE’s 2017 forward capacity auction was just completed (FCA#11) and system resources needed for 2020-2021 not only were easily filled, but the resulting system wide clearing price of $5.30 per kilowatt-month was lower than the previous year’s auction (FCA#10 @ of $7.03/kw-month), which is the lowest clearing price since the floor price was eliminated in the 2013 auction.  Just remember, those lower prices don’t start until sometime in 2020. Some of the key points from ISO-NE:

o 31,389 MW of generation, including 264 MW new, in the form of increased generating capability added at existing power plants
o 3,211 MW of demand resources, including 640 MW that is new
o 1,235 MW of imports from New York, and Quebec and New Brunswick, Canada

No large resources retired in FCA 11; a few small oil generators delisted during the auction, meaning they’ve dropped out of the capacity market for one year, but can sell energy during that time and can compete again in future auctions.

Of some significance is the fact that FCA#11 shows no indication of any potential generating capacity coming to ISO-NE from NP, which at 1090MW out of a capacity target of 34,075 MW, would represent about 3.2% of the ISO-NE system capacity.  Also of note is the fact that the latest 34,075 MW target was down from the previous year’s auction target of 34,151 MW, reflecting both increases coming from demand resources and behind-the-meter solar PV growth.

Possible State Initiatives: For example, currently the electrical energy output from all the qualifying facilities (QF) in the state have no access to sell power on the distribution system they are connected to, unless they are less than 1 MW in size and they can participate in net metering.  The multiple existing small QF projects that are hydropower, spread all over the state, total well over 50 MW alone.  When you add in the existing biomass fired and wind facilities, that number multiplies.  There has been no efforts from state leaders (as yet) to change that paradigm, which was created by “agreement” between the NHPUC and the state’s electric utilities during the deregulation restructuring of the late ’90’s. This agreement does not match with current state law in Chapter 362-A.   This situation will only grow larger when Eversource sells off its assets in 2017 under the NHPUC “divestiture order” and  another 66.2 MW of existing hydropower projects in New Hampshire will be added to the same “locked-out” bucket of QF projects, which will then total well over 100 MW of existing NH hydropower energy alone which will be forced out of the state.  Does 100 MW of hydropower sound like a familiar number? So will 100 MW of new hydropower from Canada via NP make any difference to New Hampshire when over 100 MW of existing New Hampshire based  hydropower is forced to ship out to ISO-NE (by agreement)? The obvious answer is NO, the current policies make no sense whatsoever, and state leaders have not seen fit to change them.  Why is that??

I’m not just picking on NP/Eversource.  I can perfectly understand why Eversource would want to build the proposed NP line……..especially when transmission line profits account for 38% of their total profits (see Vol 3).  I simply can’t agree, that at 3.5% of peak NH electricity demand, it has any merits as a game changing “energy project” for New Hampshire……and just “who” is going to see the mystical $80M ** energy savings each year when all our regulated electric utilities are going to function as distribution system monopolies in the future.  If all of these “savings” were real and dedicated to industrial class customers (who pay the 5th highest rates in the country) then it might make a difference to our economy.  Without large energy savings benefits targeted to the industrial class, it is at best simply an “economic development” project that may have difficulty meeting the SEC’s “public interest” criteria.  Other than it being mostly wires, Northern Pass is no different than other unpopular (to the general public) projects that have been proposed in the past in NH. What is the value of the permanent added tax base revenue to New Hampshire communities ($30M according to their website)….. and temporary construction jobs ….. along with millions of one time dollars promised to go to groups of people and special interest organizations in the state ($200M according to their website)…… in exchange for gaining favor to run a power line to MA?  All the hype is cloaked in “energy savings“, not economic development……. and the “energy savings” are neither guaranteed nor fully substantiated (see below).

If the state wants to approve it for the economic development benefits alone……. how much $$ do we get vs. how much $$ do we lose as a state, and judge it on that basis for its “public interest” value, I have no problem with it being proposed and promoted. Every business/developer should have the right to pitch an unpopular project …….. whatever it may be (ex.-casinos, nukes, oil refineries, private waste to energy, private landfills, etc. etc.), but it should be evaluated on its actual merits. Trying to wrap this project up in some “hybrid” North American flag as “cheap hydropower” from Canada; promoting “clean/renewable energy” in the US; and helping new Hampshire companies “grow/save jobs” with lower cost energy……. is pure marketing BS by a regulated public utility that has worked tirelessly to block other competing energy initiatives/solutions for years.  Let’s just call it what it is, and accept or reject it on its face value tax money and special fund $$ merits, unless it can 1) guarantee the long term energy cost savings ($80M/yr) it purports, and then 2) puts those savings in the industrial class rate payers where it can most benefit our economy by helping to expand well paying, stable, blue collar jobs in New Hampshire .  I don’t get a vote, but if I did it would certainly be NO on its merits as an energy project, unless they will guarantee the $80M/yr savings. As an economic development project, its above my pay grade to decide what’s best for New Hampshire’s total economy in the long run, especially not being a resident of the North Country, and doubly so for not being part of our tourism industry.  The SEC will need to find NP in the “public interest” for it to proceed, and if they can’t, it should die like so many other unpopular projects have in the past. I would love to see the politics surrounding NP set aside, as the public optics of this deal look worse and worse the longer it goes on.  The more money that gets spread around attempting to get a contested project approved, the more compromised our state government (and others) tends to look………. real or imagined.  Nothing ever stays hidden from the public forever, and once constructed, NP will remain a controversial feature of our state for a long time to come ………. especially after New Hampshire ratepayers figure out the NP projected energy savings haven’t materialized.  Also, lets not forget than NP isn’t going to produce anything on anyone’s electric bill until 2020 when it is projected to be on-line.

** $80,000,000/ (8760hrs x 100,000 kw) = 0.0913 $/kwh = 9.13 cents/kwh  ….which basically means that at current “energy supply” prices for Eversource, all the energy must be delivered free of charge to generate $80M/yr in savings, as all the fixed T&D costs will remain the same …or increase.  If you put all that free energy worth $80M/yr to our industrial base, then we might have something worth supporting.  Of course, most rate payers already buy their energy from 3rd party suppliers for far less than 9.13 cents/kwh, so the actual net benefits (if any) would fall far short of $80M…….not to mention that it won’t actually be offered free of charge.  Read the fine print from the NP fliers and you will find that the PPA is really only projected to produce “up to $100M” savings to Eversource customers over the 20yr life of the contract ($5M/yr ave)……and even that slim amount is not guaranteed.  The rest of the $80M/yr “energy savings” claim stems from the NP power entering ISO-NE and New Hampshire’s 9% (of ISO-NE) use of that energy, none of which is guaranteed in any way.  If you are buying all of this energy savings hype, I have some great land in Florida for you ……………

UPDATE 3-9-17: Not all is roses and buttercups in the deal with Hydro Quebec .  Who is paying for burying the line in NH? Canadians want to know. 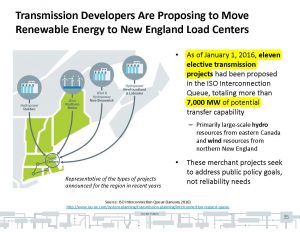 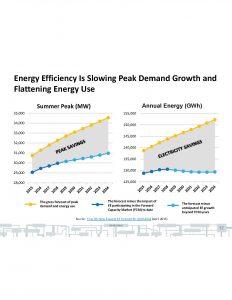