Arguably, the biggest legislative battle in 2016 on the energy front in New Hampshire was Net Metering (see Post #5).  That process eventually culminated into the passage of HB1116, which required the New Hampshire Public Utilities Commission (PUC) to issue an order in 2017 on changes to the old law and pricing structures…….which it just did.  Below is a quick outline of the PUC’s order done by the New Hampshire Sustainable Energy Association (NHSEA).

Information provided by the NHSEA:

The PUC released their final Order on net metering on Friday, 6/23/17. It is a mix of the two filed settlement proposals, and is generally reasonable and will maintain a strong industry, is good for consumers, and makes positive conclusions about cost-shifting and the benefits of DER, but keep in mind we are still combing through it. Highlights from the Order and listed below. The full Order can be found on the PUC’s website here.

To explain and discuss the Order in greater detail, NHSEA gave a webinar as part of the Local Energy Solutions series on Monday July 3, from noon – 1:00. You can view the free webinar HERE.

Questions in the Order requiring response within 30 days (PUC will facilitate):

That was a quick, but enlightening, rehash of the full Order, which you can read here .  I would encourage you to also click on the link HERE and follow the NHSEA webinar to learn more about what it all means to you.  NHSEA has about a 30 minute presentation and another 30 minutes of questions and answers …….both parts will help you out if you want to understand net metering better in New Hampshire going forward.

Now, a few of my “business” opinions on what is ………and is not included in the order for the larger system sized “business” consumers:

1) There is no increase or decrease to the electric rates credited for projects >100KW.  Some of you may think that’s a good outcome …………not me.  Going to 101KW doesn’t automatically impact the utility’s distribution system, any more than 100KW did.  Basically, “small” projects got a 25% credit on Distribution System costs and “large” projects got a 0% credit.  The wires won’t know the difference going to from 100 to 101KW.  There are many small PURPA generation projects between 101KW and 5 MW that have been sitting on the utility distribution systems in New Hampshire for decades with no “costs” attributed to the distribution system because of these projects………. and any “costs” to the distribution companies to evaluate the interconnections or physically make the interconnections were paid for by the PURPA generators.

Additionally, small projects got a 100% credit for Transmission costs and large projects got 0% credit.  Going to 101KW doesn’t automatically put you into use of the Transmission system either. Same applies to the much larger PURPA generators unless their power was potentially being “wheeled” by agreement to other utilities outside of the locally connected distribution system via Transmission Lines ……….all of which is on paper since the actual electrons stay on the local system.  New Hampshire distribution companies routinely (daily) “wheel” PURPA project generation output to ISO-NE at no cost.

In fact, a clear case could have been made before the PUC that larger projects were entitled to see credits for some portions of the “wires” chargers too ………..at the very least Transmission cost, but there was no business consumer group at the table making that case! No organized group intervened on behalf of businesses who wanted to self- generate a portion of their electrical load >100KW and use net metering to economically optimize the size of their system ……….. and receive increased off-set credits for their self- generation when it exceeds their own use ( for instance, think about weekend solar generation for most businesses). The 101KW break point from small to large is a completely arbitrary level to change classifications ………..and the subsequent rates that go with it.

Remember, the New Hampshire Electric Co-operative increased their net metering (NEM) credit rates by 25% for projects >100KW over a year ago, while slightly decreasing their small project credit rates.  Take a look at their updated rates HERE. They aren’t regulated by the PUC.  They are “owned” by their members who pay the rates. That same magnitude (25%) of increase could have easily happened at the PUC as well in this order…………. but it didn’t.  Why, because nobody argued for it (NOTE: that is a win for the utilities, not the business consumers).

2) The maximum sized individual net metering project remained the same at 1.0MW (1000KW). Once again, that works for all residential properties, commercial properties, and smaller industrial properties ……..but large industrial companies are S.O.L. (my technical term)!  Again, no one was at the table advocating for the needs of the large industrial consumer to self- generate and lower their operating costs.  If a project was sized at 1001KW, it would not be eligible to net meter at all.

3) The one new (good) provision in the order for large projects deals with the 20% rule for self- consumption (i.e- if you consume >20% of the project’s output, you don’t have to register to act as a group net metering host, but you can function as one).  For properties that can take advantage of this provision, that’s one in the win column for you!

In general, think of this new (after September 2017) period of Net Metering as Phase II.  Phase III will come along some time (years) down the road after the pilot projects and studies have been undertaken and completed, and there is more real NH data to go by for future modifications to net metering ……. like real time pricing effects, actual system benefits to DER determined, etc. etc. Meanwhile, let’s hope that someone takes the initiative to increase the allowable project size from 1MW to 5MW during next year’s legislative session so that large industrial consumers can see some meaningful benefits too, because they need more options than they have today for “competitive” energy supplies. 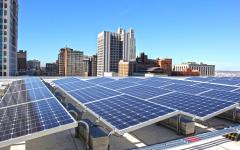