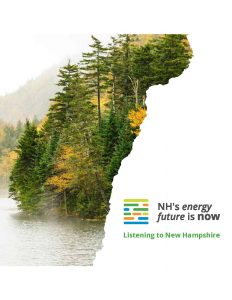 Earlier this year, a consortium of clean energy interest groups issued a report under the “NH’s Energy Future is Now – Listening to New Hampshire” title ( see NHEnergyFuture.org).  Although I doubt that many NH businesses actually saw or read the print version of this report, several prominent NH businesses were featured in it including: Cranmore Mountain Resort; Hypertherm; Red Hook Brewery; and Worthern Industries.  For businesses operating in New Hampshire who have a keen interest in lowering their annual energy costs, this report together with the associated UNH reports referred to below, are worth reading to get a better perspective on the realities of energy choices in New Hampshire.  There is also more on YouTube.

Here are a few of my takeaways from this effort, that also relate to previous positions put forward in our 2017 NH Business Energy Education Series include:

Although we constantly hear about energy Rates, what consumers really pay are energy Costs.

We have had, and will continue to have, high energy rates for energy commodities in New Hampshire compared to many other parts of the country.  High electricity and fuel rates in New Hampshire have been discussed in many of our prior posts.

Recent studies by the UNH Carsey School of Public Policy show that New Hampshire consumers actually pay equal to or less than national average monthly  Costs for energy.  Why? ……..because we use less, not because our rates are low.  In regions of the country where rates are lower, state policies and consumer demands have not pushed for adoption of efficiency strategies to lower consumption.  No matter what the rates are, find ways to use less ………and then you always pay less. You can use less of their stuff (commodities) by employing energy efficiency and self-generation alternatives.

FROM THE CARSEY SCHOOL OF PUBLIC POLICY: “Cost of Electrical Power in New Hampshire In 2015, electricity accounted for approximately 25 percent ($1.7 billion) of all energy expenditures in New Hampshire, and average retail electricity prices in the state, at 18.5 cents per kilowatt hour, were the eighth highest in the country and 47 percent higher than the U.S. average . The latter is also the case for New England as a whole. But despite these higher rates, the average monthly New Hampshire residential electricity bill was $115, similar to the U.S. monthly average of $114.6 New Hampshire residents pay 5.5 percent of their income for overall household energy-related expenses, similar to the overall U.S. resident portion of expenditures at 5.6 percent. In terms of commercial use, the average monthly New Hampshire electric utility bill in 2015 was actually lower than the U.S. average commercial bill, at $529 versus $671.“

As a consumer, if you are taking the capital risk of paying for large, long term energy solutions from a utility, its time to think twice about what technologies may impact that decision in the future.  Low cost energy efficiency measures and small distributed generation projects using renewable resources are far lower risk options than building large gas pipelines or long distance transmission lines.  New gas from fracking is here now, but there are no guarantees that long term, the current economics will hold up.  Technology disruptions happen all the time now, so let’s not bet the farm and take the risk on one or two BIG long term low tech options.

FROM THE CARSEY SCHOOL OF PUBLIC POLICY: “Our findings suggest that there is no immediate need for New Hampshire to expand natural gas pipeline infrastructure. If the state wishes to intervene in the market by obligating ratepayer funds to reduce wholesale electricity costs, additional public investment in major pipeline infrastructure should wait until a rigorous study has been completed that models system wide natural gas flows and prices. This study should lead to an improved understanding of the difference between the technical and economic capacity of the existing system and explore opportunities to access more of the technical pipeline capacity in cost-effective ways. To date, no study of which we are aware has performed the level of rigorous analysis required to justify a major multidecadal contract obligating ratepayers, and moving ahead without such a study would essentially make ratepayers energy market speculators. Policy makers also may want to consider other options that carry less risk and a better return on investment, including better utilization of existing infrastructure and increased investment in energy efficiency and renewable energy.”

C – Growth in New Hampshire’s Economy is no longer tied to Energy use.

Notwithstanding the opinion that New Hampshire’s manufacturing base is worthy of some form of energy costs relief, our general economy is not failing.

FROM THE CARSEY SCHOOL OF PUBLIC POLICY: “New England has adapted to higher prices through energy efficiency and other energy management investments even as the combined gross domestic product (GDP) for all six New England states increased by 9.7 percent from 2005 to 2015, overall energy use declined by 9.6 percent”

As I have stated many times in past blog posts, our efforts to help businesses reduce their energy costs should be targeted to our manufacturing base where it really matters the most for our job retention and job growth.